The Story of Our little Buddy

It was exactly three years ago this morning that James received an “urgent” email with a photo of a scruffy little dog wearing a necktie. The message read, “Do you know anyone at all who may be interested in adopting this little guy? We need to find him a forever home within the next few hours as he is scheduled to be put down at three o’clock this afternoon!”

James had been haunting me about adopting a dog for about five years but I was holding fast to my decision not to do so, as we travel a great deal for our job and it would be unfair to ask family members to dog-sit for us that often. Beside, my workload was already full and I was not relishing the idea of having to care for a dog on top of all the other things I already have in my daily schedule.

“Oh the drama!” I replied when he called me into the office to see the dog’s photo and message. “How old is the dog?” I asked.

“He just turned thirteen months this week,” James replied, reading the details in the message.

“Like they’re really going to kill a one year old dog for no reason,” I responded. “That’s ludicrous!”

“But they are!” James added. He was given a stay of execution when Dan and Ron (two guys who run a dog rescue here locally) took him from an all-kill shelter with the stipulation that they had to find him a home within a week. The dog’s time is up today so he must be brought back to be put down.”

“Oh, someone will adopt him if that’s true. There are people out there in Wellington with large farms who could offer the lil’ guy a great life!

I returned to the business of my day but for some reason, I was unable to get that silly dog out of my head. What if nobody steps up and takes him? How awful that they would simply end his young life. It’s not the poor pup’s fault that he has no home.

By noon I caved in and asked James to see if the dog was taken. He checked with Dan and Ron and no one even called about him as of yet. I could actually feel myself start to sweat thinking that the dog may really be put down in the next couple of hours. Before I even realized what I was saying, I called out, “let’s go have a look at him!”

When we arrived at the guys home where they sheltered the dogs, I saw that there were a bunch of canines running around the fenced-in yard.

Dan informed us that he and Ron had rescued and found forever homes for three hundred and forty-some-odd dogs this season by bringing them to the Wellington Horse Show. This little guy had arrived after the end of the season and there was no longer a show to bring him to and almost no one left in the very seasonal community to even consider saving the little guy.

He explained that the dog had been removed from an extremely abusive situation after neighbors could no longer bear to hear the dog cry. He had been caged daily and placed into direct sunlight without any water as part of his routine torture. His fur showed the evidence of his plight as it had been bleached out into spotty red tones by the strong mid-day sun. In his short life, the dog had been beaten regularly and was dehydrated from the sun torture. He was skinny from malnutrition and had never had a haircut (or bath for that matter.)
I went out into the yard where the dogs were roaming and playing, I sat down in the grass and called out. “Come ‘er buddy!” The word buddy was used as a term of endearment as in my buddy or friend. In a second, the little Miniature Schnauzer-mix broke away from the pack and came prancing like a gazelle into my lap. He began to bark and kiss my face as if he knew before I did that we belonged together. All I could think was; how could anyone want to harm this tiny animal who only wanted to love and be loved back?

Holding back a tear, I looked up at James and Dan as I gently sighed, “We’ll take him and his name is now Buddy!” The little guy, who came with the name of Cuba, reacted so well to my call of buddy that it only seemed fitting.

He was, but I wrote it off to excitement. Dan conceded that the pup was indeed yelpy for the first few moments with anyone new. Between that and his history, Dan believed people had been scared-off from adopting the dog for fear that he may have too many issues. It was a Friday afternoon so James asked if we could possibly take him home on a trial basis for the weekend to see how the dog may adjust to life in our home. Dan agreed to the test, and James asked one last question, “Can we take him directly to a groomer?” He was dirty and tangled and it was quite difficult to even imagine what he truly looked like under all that long and scruffy fur.

After a bath, a haircut, a manicure, and even a blueberry facial, Buddy emerged a very handsome and regal looking pooch and I do believe that he knew it himself!

A Now Well-Groomed Buddy Striking a Pose for the Camera

From the moment we walked in the door, Buddy never left my side and every time I sat, he would jump up onto my lap. He watched me work, clean, and even watched as I peed as he took in all the curious details of my day. When he finally had to pee himself, Buddy ran into the bathroom and lifted his leg against the toilet, proud that he knew exactly where to relieve himself at his new home. How could I get angry at what was plainly an attempt to do the right thing? All I could do was call out, “NO, no! Not there!” through my laughter. Then I leashed him up and took him outdoors to go. That was his first and only bathroom mistake… ever!

On my Lap and in My Arms

One of the things I noticed about Buddy was how he would panic when I tried to take him for a walk. With the memories of his torture in the sun still fresh in his mind; as soon as he was out of the shadows and entered the sunlight, he would try to pull himself into any shade he could see. He would try to escape the sun’s rays by going under a bush, a tree, even under parked cars. It took a couple of weeks before he learned that stepping into the sun was not a punishment and that he could freely leave the sunshine at any time. These days it does my heart good to watch my lil’ Budster actually decide to sit outside by the pool, taking in the sun’s warmth for the pleasure in which God intended. 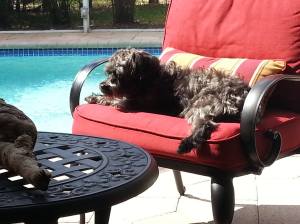 Soakin’ Up the Sun!

I was told by three different trainers that I would never be able to teach him the command “come,” as each time he heard the phrase he would run away, cowering and shaking with fear. To him the command meant, come and take a beating. It was suggested that I try to teach him a new word like “side” or “here” but I was determined to teach him that it was his former owner who was bad and not the word. I am happy to report that Buddy does indeed understand and obey the word come. He does so without any question, fear, or doubt in his mind.

After having a test done on Buddy’s DNA this year, it was determined that one of his parents was 100% pure-bred miniature schnauzer and the other 100% multi-generational mutt. I believe that when he was a puppy, one could not tell he was a mixed-breed and that his first owner planned to breed him. He had already had the dog’s tail cropped like a true breed and had not had him neutered. I think that once Buddy started to grow, it became evident that he was not a pure-breed and therefore worthless to the owner, who took his frustration out on the innocent dog.

I don’t know all that Buddy had gone through during that first year of his life, in fact I try not to even think about it. I do know that nowadays, he is quite a happy and loving member of our family and I can’t even imagine my life without him in it. He helps me through my issues with chronic- acute pain and gives me at least a few reasons to laugh out loud each and every day. His actual day of birth was sometime during the last week of February 2011 but we celebrate his “re-birthday” of March 30th; the day (thirteen months after he was born) when he became a member of our family… forever! 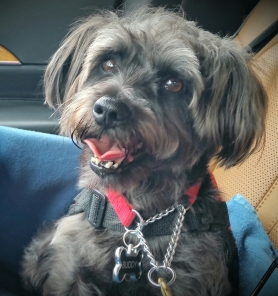 Happy Birthday Buddy, you are and always will be, my little man!