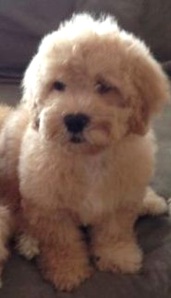 Okay… so I was traveling and was going to be away for my birthday.  It was one of those trips where anything and everything that could go wrong did!

I was supposed to do a book reading and signing, but the books could not get to me on time.  Once that was canceled, I tried to get back home to spend my birthday with James but JetBlue wanted more money to change my ticket than it cost for the entire round-trip.

While waiting to see if an affordable seat would miraculously become available, I wrote a little blog about my 55th birthday… and then the rug was pulled out from under me.  I no sooner hit “post” on the blog when I suddenly received an email from James.  I knew he was up to something, as the subject of the email read “Ohhhh Pleeeeease!”  When I opened it up, there was a photo of a cute little ball of fur that he was looking to adopt.

Now I am not even going to try to act like I didn’t melt since you all found out what a soft touch I was with Buddy, however I did TRY to be strong.  I called him back and asked him if he had lost his mind since I left for my trip.  You see, Buddy was away at school becoming a certified service dog complete with three weeks of training.  “How,” I asked “is he going to retain what he learned if we allow a three month old puppy into the house that is too young to be trained?”  I sighed heavily and gave him an emphatic, “No way!  He’s not potty trained; he’s going to chew on furniture once he starts teething, yatta, yatta, yatta.”

I think my downfall was going back to look at the photo.  Forty five minutes later, I had James on the line and I told him to go ahead and pick up the pup.  After all, I was assured that he was only going to be about 13 pounds once fully grown.  I can handle 13 pounds of canine cutie.  And so just like that, we got a new puppy for my birthday.  I guess it is only a myth that wisdom comes with age.

After James took the puppy to the vet for a check-up, it turned out that he was already just shy of 12 pounds and he is only three months old, so much for being 13 pounds when he’s grown.  The vet said, and I quote, “His paws are like baseball mitts, he’s got a lot of growing to do!”

Then, just as if the universe was trying to send me a message to chill out, my laptop crashed, my cell phone crashed and my charger shorted out.  My sister’s house phone rang and when I answered it… IT went dead.  Heck, I simply pushed the “on” switch to her coffee pot and it stopped working!  I was then banned from touching anything that worked by electricity or batteries.

Well I got home the other day and this Teddy bear of a pooch has won my heart.  He’s fluffy, cuddly, soft, and gentle as the day is long.  I can’t help smiling every time I look at him.  What’s more, if I didn’t know better, I would swear that he and Buddy have had a secret doggie chat and I have been marked as the marshmallow of the family.  Or maybe it was James who told them I was a soft touch.  After all, his strategy was to have me name both the pooches.  Anyone knows that if you name them… you’ve got to keep them.

We are now a family of four.  In six weeks we doubled our size.  I am happy to report that Buddy’s training went very well and he is such a good boy.  He and I have training together for few day next week, as now I have to be trained as his handler.  Theo has never had an accident in the house [keeping my fingers crossed that it stays that way] and as much as I don’t understand how this happened, who would I be kidding if I didn’t admit that I am glad it did?

Now please just shoot me if I become one of those people who put their pups on Christmas cards and tee shirts or heaven forbid, slap a “My Dog is Smarter than Your Honor Student” bumper sticker on my car.  But I don’t think any of you would fault me for having their picture on my coffee mug would you?

Theo in his car seat